In 2020, living without a smartphone is hard to picture. What will tomorrow’s smartphone look like? Will smartphones still be as important in our lives or will they also die to make way for other technologies? Here is why the new smartphone is no-phone.

How will we see the 2010s in 10, 20, 30 years? To answer this question, we have to take a step back. The future we imagine is often distorted by the prism of the times in which we are immersed. In the movie Back to the Future 2 (1989), they imagined 2015 with flying cars, a jacket that dries by itself or giant holograms. Today, it is easy to see that what was imagined is far from reality. If we were to represent the 2010s, the icon of this decade would undoubtedly be the smartphone.

If smartphones have evolved a lot over the last ten years, are we expecting other revolutions? Voice assistants, VR, AR, wearables: technology is constantly evolving and interfaces are multiplying. It’s time to wonder what the future of the smartphone will be.

Smartphones were the star device of the 2010s

Smartphones are not just phones or communication devices. Beyond the technological object as such, smartphones transformed the way we think about the world and the way we entertain ourselves, how we move, eat, share information.

In the 2000s, the core functionality of a mobile phone was calling and texting. These features seem almost incidental for a phone in the 2010s.

In the 2010s, the smartphone was massively adopted worldwide, it replaced the computer for most activities, screens and apps multiplied, networks became more efficient for more and more content created, consumed and shared.

Smartphones are now a companion of every moment. They are like magic wands allowing us to instantly realize all our wishes. Our phones have become an integral part of our lives without us realizing it. Sometimes even to the point of addiction.

How Apple did reinvent the phone

Remember. When Steve Jobs first introduced the iPhone in 2007, who would have thought that it would become a standard for the following decade?

Steve Jobs wanted to “reinvent the phone”. Actually smartphones did not only changed the landscape of the mobile industry. Smartphones were a revolution. Smartphones made it possible for anyone to do 90% of what was done on desktop at the time: read and write emails, go on the Internet, watch videos, listen to music, organize photos, access Google Maps, shop and even more.

Smartphones have created a new market. Without smartphones, Uber, Instagram, Snapchat, Deliveroo or Uber Eats, Tinder and many other services that we use on a daily basis would never have existed.

Twelve years after iPhone’s initial release, about 1.5 billion iPhones have been shipped worldwide. 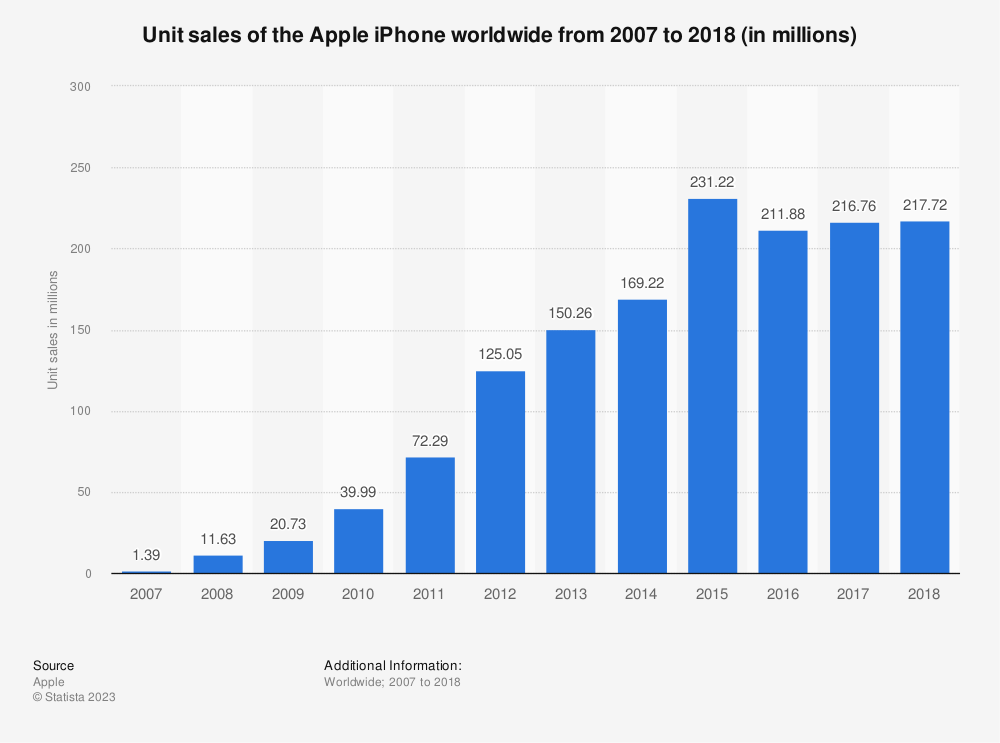 Smartphones evolved at a frenetic pace

Some noticeable evolutions of the iPhone (in addition to other major technical improvements):

The evolution of the iPhone had took place at the same time as users’ consumption habits were changing and new technical possibilities emerged: instant communication, creation, distribution and sharing of more and more content in terms of volume and quality (audio, photography and video) and fusional relationship between the user and the device (voice, fingerprint, facial features) with increasingly personalized services.

Apple took the lead at the beginning of the decade before being overtaken by many competitors. Since then, the brand seems to be struggling to continue to shine in the eyes of consumers.

The historical leader in mobile phones since the 1990s, Nokia, has given way to vendors that did not exist on this market until the previous decade: Apple and Samsung in the lead, followed by the rise of the two Chinese Huawei and Xiaomi at the end of the decade.

Mobile-First: the end of desktop reign

Desktops and even laptops have gradually been abandoned in favor of mobile phones. This very strong phenomenon over the decade forced developers to think “mobile-first” when it comes to imagining apps or websites. On the business side, smartphones have deeply transformed the way companies interact with their customers.

Over the decade, while tablet traffic never seems to have really taken off (the first iPad was introduced in 2010), there has been a dramatic decrease in desktop/laptop traffic to the benefit of mobile traffic worldwide.

This underlying trend could continue to increase in the coming years and has even led us to wonder whether, in the longer or shorter term, computers might not completely disappear in favor of mobile devices that could only interface with larger screens or other more suitable devices if needed.

Smartphones in the 2020s: Toward No Phone?

What is the future of smartphones? Despite the new phones launched every year at a frenetic pace, many complain about the lack of innovation in recent years. Will foldable smartphones and 5G breathe new life into the sector? Smartphones have now replaced desktop in many ways. Similarly, is it possible that smartphones will also end up taking a back seat?

Foldable smartphones combine the practical size of a phone and the screen comfort of a tablet thanks to the simple action of unfolding the screen like a roll of paper.

In 2020, phones with foldable screens are a reality. Many vendors now offer a foldable phone, one of the most famous being Samsung with Samsung Galaxy Fold.

Foldable phones and laptops with flexible screens give more comfort for activities that require a larger screen: watching videos, playing video games or even carrying out tasks as part of a professional activity. However, I think we need to go beyond technical innovation and ask ourselves about the use of these technologies in a digitized ecosystem.

Whereas computers and phones were until now single points of interaction, the emergence of the Internet of Things (IoT) has given rise to the multiplication of points of interaction. Gateways are being created between the different devices which are now only one of the possible means of interaction. The device in itself is losing its power of attraction in favor of a more diffuse technology. Technology tends to be more disseminated in everyday life, also thanks to the development of cloud technology.

What is the Internet of Bodies (IoB)?

In an article for Forbes, best-selling author Bernard Marr explains that we are transitioning from the Internet of Things (IoT) to the Internet of Bodies (IoB), that is to say “using the human body as the latest data platform”. He lists three generations of IoBs:

There has been a few example in IoB that have made headlines in recent years, mostly in healthcare such as “smart pills” (digital chemotherapy pills) or smart contact lenses for people with diabetes. There are still concerns about the security of health data and about risks to the health of individuals themselves if the machine is hacked.

But the IoB is not only about health, it can be used in everyday life and replace keys or anything in a wallet. A rather disturbing use case (in 2017) is the technology company that implanted RFID chips in the hands of their employees with their consent, allowing them to enter secure buildings, log on to computers or buy foods and drinks.

Apple Watch: “The most personal product ever made”

The smart watch overshadows traditional luxury watches thanks to the functionalities it offers: management of calls, messages, notifications, apps and above all health monitoring.

Apple relies on the Apple Watch to position itself in the health sector thanks to features that have gradually been introduced: fall detection, heart-rate monitoring and EKG.

More than that, and ironically enough, Apple’s goal seems to be to free people from their phones. During the prototyping phase of the Apple Watch, the team attached an iPhone to a wrist using a Velcro strap. According to Alan Dye, Chief of Apple’s human interface group in 2015, “There was a sense that technology was going to move onto the body”. He said: “We felt like the natural place, the place that had historical relevance and significance, was the wrist.”

Once again, and against all odds, the company rose to the challenge. In 2018, Apple sold more than 22 million units of the Apple Watch worldwide, putting its market share at 50% (source: statista.com).

Will the Apple Watch become a stand-alone device in the future?

Despite some interface limitations due to the small size of the screen (writing long messages or browsing the Internet is definitely not easy on a watch), the Apple Watch meets many of the needs provided by a smartphone today. Most of the time, you mechanically look at your phone to monitor your notifications, respond quickly to messages, make Apple Pay transactions, check the weather or what time it is. Combined with proper headphones or other connected devices, a smart watch allows you to be less dependent on screens and enjoy the moment more.

A world without screens?

The pace will accelerate further from this year onwards. With the 5th generation of mobile Internet connectivity, machines, autonomous vehicles and other smart devices will be able to collect and transfer more data, exchange much more information with each other, much faster and use much more sophisticated artificial intelligence.

After having spread everywhere in the last decade, screens could be made more discreet to give way to a multiplicity of interfaces: voice (read my article on voice tech for seniors), tactile or more organic interfaces. Screens will only be there when they have a real use and we may no longer have our noses glued to our phones, tablets, laptops or TVs.

Of course, it’s hard to imagine a world without screens now. Yet other wearables could increase our daily experience and free us from the phone.

Augmented reality glasses allow users to access the information they want while keeping their hands free. They could replace all the screens with one appearing before our eyes.

Similar products came out during the 2010s, such as Google Glass, which was a commercial failure. The market is now more mature and it is likely that new augmented reality devices that can be used on a daily basis are likely to gain consumer acceptance in the 2020s.

“The company that finds the hardware and the use case will be as successful as the iPod!”, Bernard Kress (Partner Optical Architect in Microsoft’s HoloLens Project) said at CES 2020 about smart glasses. The former architect of Google Glass thinks Apple will enter the market this year.

Alban Huberhttps://www.albanhuber.com
Free and independent being, halfway between the material and the virtual world.

0
What will the pharmacist of the future look like? From temples in Ancient Egypt where physician-priests prepared remedies to dispensaries of the 20th century, the role of the pharmacist has definitely evolved. Yet the core of the profession has not changed.
Read more
How Tech Will Save Us

Voice Tech: 3 Reasons Why the Elderly May Love It

0
Three reasons why voice is the perfect user interface to support people who are losing their autonomy.
Read more

Why Toxic Masculinity is a Problem that Affects Us All

3 Steps to Create (Actual) Value in Your Job

5 Underrated Superpowers You Need to Think About